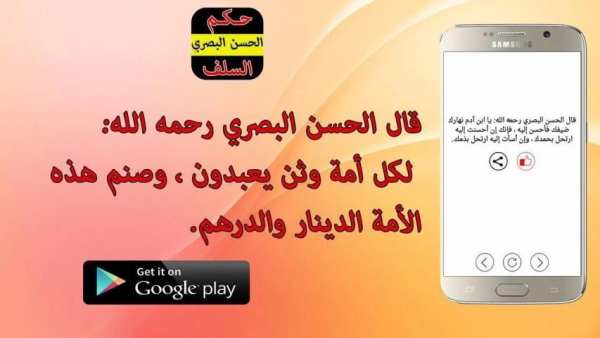 Are you finding some interesting apps? 10,000+ users downloaded حكم السلف : الحسن البصري latest version on 9Apps for free every week! Many latest version apps provided on 9Apps too. This hot app was released on 2017-10-05. Besides, you can also select other popular apps you like here!
Hassan ibn Yasar Basri (21 AH / 642 AD - 110 AH / 728 AD) the Imam and the world of the Sunnis and the group scientists nicknamed Abu Said was born two years from the end of the caliphate Omar ibn al-Khattab before in the city in twenty-one migration, or al-Hasan was affiliated to the service of Umm Salamah, sends her back in It needs Vepki Hassan, a child Fterdah Umm Salamah to Tskth so infants from Umm Salamah, and grew up in the house of prophecy. Umm Salamah was graduating to companions Vidon him, and called him 'Umar ibn al-Khattab, he said: "Oh God, in his understanding of religion and Habbh to the people." Remember the Koran al-Hasan was ten years old.
His name and lineage and his tribe
Is al-Hasan ibn Abi al-Hasan left, Abu Said, sire Zaid ibn Thabit al-Ansari, said: Mawla Abi Yosr heel bin Amr peaceful. His father sire Jamil bin of captivity, a stitch of Maysan, housing the city and freed and married her in the succession of Omar ibn al-Khattab by Hassan Fuld has mercy of God Alih- for two years of succession have remained life. And his mother's finest Mulap Umm Salamah the mother of believers were served, and perhaps sent by the need V_igl for her son Hassan, a baby Vchaglh Umm Salamah Barzaath, And they believe that the wisdom and science that Ootea Hassan from the blessing of those breastfeeding believers or wife the Messenger of Allah, then it was a small graduation to his mother companions Vidon him, and was among those who call him Omar ibn al-Khattab, he said: ((Oh God, his understanding of religion and Habbh to people)).
I will work on applications containing sayings and judgment through the likes of the sayings of philosophers, the rule of the reality of life and the experiences of others containing salvation experiences of others through their positions daily life to benefit from them and exchanged through various programs metal Facebook, Twitter, Alwats August and various other programs.
Tips and sayings of the greats, such as courage, words about love, phrases for separation and longing, sermons, and the likes of popular need to benefit and work in your daily life to move towards a better day rule and thoughts and reproach and sayings and illustrated like an Arab, Thoughts of success, the sayings of the famous, the sayings of celebrity The pioneers and poets
Thoughts and phrases about life pictures free application puts your hands free pictures written by the words beautiful and downright rule Stjbkm
Search for judgment or easy Rmaziat Jeddah to display a bunch of free Zkhmh rule and the likes of life, love and cases
You can share them or using them at Krmaziat in
Facebook
Anstaqram
What's Up
And many applications with ease
Cases Watts August