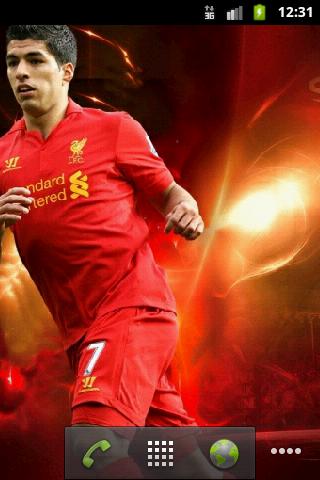 The No.1 store for free apps, games & videos. 10,000+ users downloaded Liverpool Football Club LWP latest version on 9Apps for free every week! In my opinion, you will like this app after use it. This hot app was released on 2017-05-04. Enjoy playing with new, amazing features!
This live wallpaper is made for all who are fan of Liverpool football Club. If you like our live wallpaper, please give us a 5 star rating!!== Instruction ==Home --> Menu --> Wallpapers --> Live Wallpapers --> Liverpool Football Club LWPNOTE: This is live wallpaper, so you can't open the app like you normally would. Just follow the instructions above and activate the wallpaper.=== More on Liverpool Football Club === Liverpool Football Club is an english Premier League football club based in Liverpool. The club has won eighteen League titles, seven FA Cups and a record eight League Cups. Liverpool has won more European titles than any other English club, having won five European Cups, three UEFA Cups and three UEFA Super Cups.Liverpool was founded in 1892 and joined the Football League the following year. The club has played at Anfield since its formation. The most successful period in Liverpool's history was the 1970s and '80s when Bill Shankly and Bob Paisley led the club to eleven league titles and seven European trophies.The club's supporters have been involved in two major tragedies. The first was the Heysel Stadium disaster in 1985 in which charging Liverpool fans caused a wall to collapse, killing 39 Juventus supporters and resulting in Liverpool being banned from European club competitions for 6 years. In the 1989 Hillsborough disaster, 96 Liverpool supporters lost their lives in a crush against perimeter fencing.Liverpool has long-standing rivalries with neighbors Everton and Manchester United. The team changed from red shirts and white shorts to an all-red home strip in 1964. The club's anthem is "You'll Never Walk Alone".Liverpool F.C. was founded following a dispute between the Everton committee and John Houlding, club president and owner of the land at Anfield. After eight years at the stadium, Everton relocated toGoodison Park in 1892 and Houlding founded Liverpool F.C. to play at Anfield. Originally named "Everton F.C. and Athletic Grounds Ltd" (Everton Athletic for short), the club became Liverpool F.C. in March 1892 and gained official recognition three months later, after the Football Associationrefused to recognise the club as Everton. The team won the Lancashire League in its début season, and joined the Football League Second Division at the start of the 1893–94 season. After finishing in first place the club was promoted to the First Division, which it won in 1901 and again in 1906. Liverpool reached its first FA Cup Final in 1914, losing 1–0 to Burnley It won consecutive League championships in 1922 and 1923, but did not win another trophy until the 1946–47 season, when the club won the First Division for a fifth time. Liverpool suffered its second Cup Final defeat in 1950, playing against Arsenal. The club was relegated to the Second Division in the 1953–54 season. Soon after Liverpool lost 2–1 to non-league Worcester City in the 1958–59 FA Cup, Bill Shankly was appointed manager. Upon his arrival he released 24 players and converted a boot storage room at Anfield into a room where the coaches could discuss strategy; here, Shankly and other "Boot Room" members Joe Fagan, Reuben Bennett, and Bob Paisley began reshaping the team.Liverpool's first trophy was the Lancashire League, which it won in the club's first season. In 1901, the club won its first League title, while its first success in the FA Cup was in 1965. In terms of the number of trophies won, Liverpool's most successful decade was the 1980s, when the club won six League titles, two FA Cups, four League Cups, five Charity Shields (one shared) and two European Cups. Liverpool has won the English League Championship eighteen times, the FA Cup seven times and the League Cup a record eight times. The club achieved a League and FA Cup "double" in 1986 and won the League and European Cup double both in 1977 and in 1984.