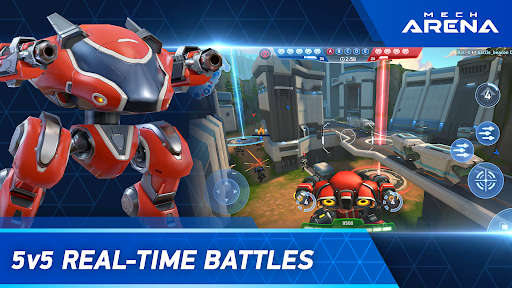 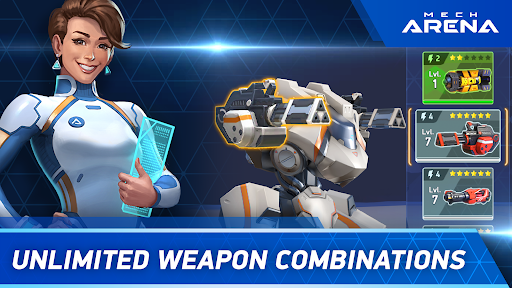 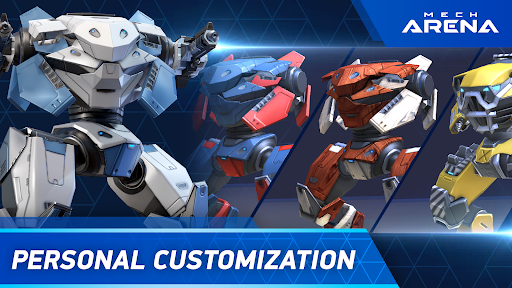 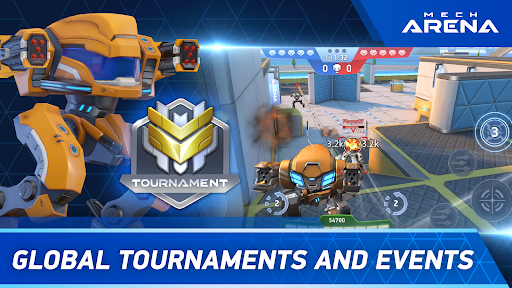 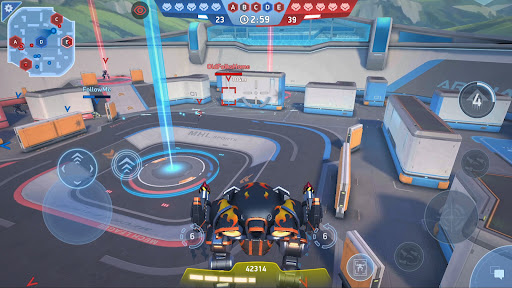 🛡️ Mech Arena is a FREE quick-fire competitive robot game with explosive PvP team battles, deep combat tactics, and limitless customization.
In this shooter, you can play custom matches against your friends or team up to take down players from around the world in live 5v5 and 2v2 matches. With maps designed for fast PvP combat, battles take just 5 minutes!
Just select a war robot from dozens of options, equip it with the perfect weapon loadout, and take on all comers. Then, customize the looks and stats of your bots as you rise up the divisions to reach the top. With instant team match-making, you can go from pocket to live battle in this robot game in less than a minute.
Make your name as the greatest shooter in the Mech Arena League today. The world is watching!
| EXCITING ROBOT GAME FEATURES |
PvP GAME MODES GALORE
Vie for territory in Control Point Clash battles, test your teamwork in 5v5 Deathmatch mode, or go toe-to-toe in 2v2 Deathmatch combat. Whatever you choose, you’ll need to hone your shooting game and strategize with your team to win.
25 UNIQUE MAPS
Are you a stealthy sniper or a short-range shooter? In this robot game, every map favors different mechs and tactics. Play under the neon lights of the Forbidden City, or take your combat to the stars at Elon Station Gray. Explore and master them all!
ENDLESS MECH BUILDS
Strap in and enter a new era of robot fighting games. With over a dozen distinctive bots and 35 weapons, you can counter any tactic. Upgrade your favorites and trick them out with 500 skins to express yourself in the PvP arena!
SPECIAL MECH ABILITIES
Blind your rivals’ best shooter with targeting jammers. Wreck their war robots by ramming them. Deploy energy shields, repair fields, jump jets, and more. Know when to use the abilities of your bots if you want to win in combat.
STAR MECH PILOTS
Hire Pilots to give stat boosts and other bonuses to your Mech. Figure out your favorites, level them up just by using them, and enhance them further with advanced implants to give your robots the edge.
FUN CUSTOM MATCHES
Play by your rules: pick the map, mode, and players you want in a Custom Match. Prepare a killer new tactic, set up a PvP tournament for bragging rights, or try out some new bots and weapons. In this robot game, the choice is yours.
THRILLING TOURNAMENTS & EVENTS
Hit all your objectives in weekly Events or battle through competitive Tournaments to show that you’re a cut above the rest. Prove your worth to win big, and write your name in Mech Arena history.
POINT-AND-SHOOT SIMPLICITY
Robot fighting games have never been this effortless to play. Intuitive controls make it easy to get the hang of your war robots even in your first PvP battle. Want to play it your way? Customize your controls so your bots fit your needs.
NO WIFI? NO PROBLEM
Mech Arena is a shooter designed to run smoothly on most 4G/LTE networks. So, you can enjoy combat with your war robots on-the-go, wherever you are. With short battles lasting a few minutes, this robot game is perfect for a quick break!
PLEASE NOTE:
• Items are available for purchase in this robot game. Some paid items may not be refundable depending on the type of item.
• Mech Arena is available in English, French, German, Italian, Chinese (Simplified & Traditional), Japanese, Korean, Portuguese (Brazilian), Russian, Ukrainian, Spanish, Turkish, Tagalog, Thai, Vietnamese, Indonesian, and Malay.
| OUR ROBOT FIGHTING GAME LINKS |
Mech Arena Website: https://plarium.com/en/game/mech-arena-robot-showdown/
Mech Arena Support: [email protected]
Mech Arena Community: https://plarium.com/forum/en/mech-arena/
Privacy Policy: https://plarium.com/en/legal/privacy-and-cookie-policy/
Terms of Use: https://plarium.com/en/legal/terms-of-use/
Privacy Request: https://plarium-dsr.zendesk.com/hc/en-us/requests/new