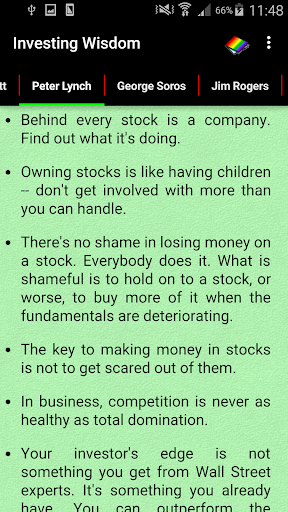 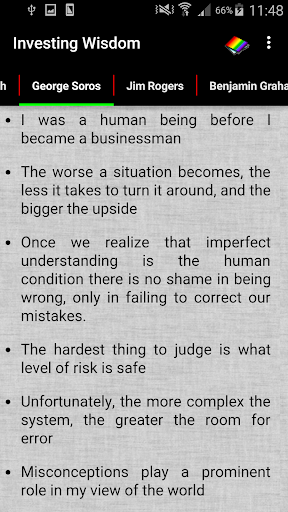 - Warren Buffett is an American business magnate, investor and philanthropist. He is the most successful investor in the world. Buffett is the chairman, CEO and largest shareholder of Berkshire Hathaway, and is consistently ranked among the world's wealthiest people. He was ranked as the world's wealthiest person in 2008 and as the third wealthiest in 2015.
- Peter Lynch is an American businessman and stock investor. As the manager of the Magellan Fund at Fidelity Investments between 1977 and 1990, Lynch averaged a 29.2% annual return, consistently more than doubling the S&P 500 market index and making it the best performing mutual fund in the world.
- George Soros is a Hungarian-American business magnate, investor, political activist and author who is of Jewish-Hungarian ancestry and holds dual citizenship (Hungary and the United States). He is chairman of Soros Fund Management. He is known as "The Man Who Broke the Bank of England" because of his short sale of US$10 billion worth of pounds, making him a profit of $1 billion during the 1992 Black Wednesday UK currency crisis. Soros is one of the 30 richest people in the world.
- Jim Rogers is an American businessman, investor and author. He is currently based in Singapore. Rogers is the Chairman of Rogers Holdings and Beeland Interests, Inc. He was the co-founder of the Quantum Fund and creator of the Rogers International Commodities Index (RICI).
- Benjamin Graham was a British-born American economist and professional investor. Graham is considered the father of value investing, an investment approach he began teaching at Columbia Business School in 1928 and subsequently refined with David Dodd through various editions of their famous book Security Analysis. Graham had many disciples in his lifetime, a number of whom went on to become successful investors themselves. Graham's most well-known disciples include Warren Buffett, William J. Ruane, Irving Kahn and Walter J. Schloss, among others.
- Charles Thomas Munger is an American businessman, lawyer, investor, and philanthropist. He is vice chairman of Berkshire Hathaway, the conglomerate controlled by Warren Buffett; in this capacity, Buffett describes Charlie Munger as “my partner."
- John Marks Templeton was an investor and mutual fund pioneer. He was born in the town of Winchester, Tennessee, and attended Yale University. Mr. Templeton began his investments career at the Wall Street firm Fenner and Beane, where he discovered the power of value investing by always looking for bargain prices. He then married his wife, Judith Folk, at the young age of 25. Templeton and his wife saved as much as 50% of their income, saving enough money to open his own investment firm. John Templeton has proven to be a successful investor using a fundamental analysis approach, quadrupling his money within the first four years of investing, creating a well know reputation in Wall Street.