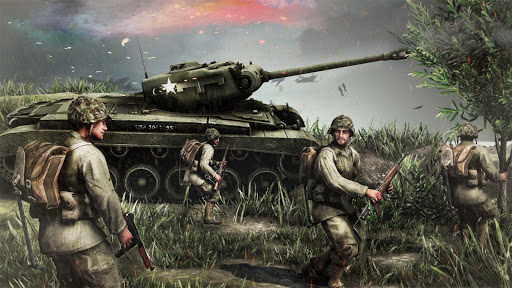 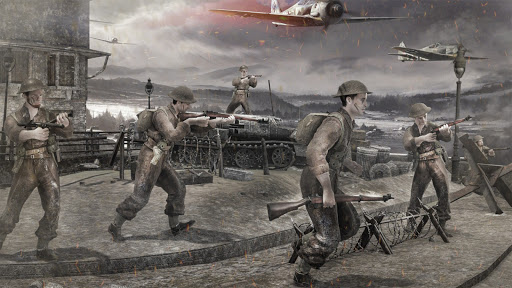 World War 2 Game (Call Of Courage)
Canadian Rig presents the best free offline gun shooter games 2021. In these commando shooting games you will perform your duty as an D-day Military American Commando in the greatest shooting fps game play war of the history and perform very secret assassins shoot game missions which will change the outcome of this World War 2.
You are a secret American commando and you are accompanied by a fully trained frontline strike dog which will help you to successfully accomplish these 古典射击 冒险小游戏 missions. The commando mission games world is out of order; Hitler wants to win this (WW2) by destroying neighboring countries and occupying their space. The siege world needs a miracle and the angry commando hunters want to overcome his madness, and now you as a special force commando will try to save the shooting fps game play world.
“Call Of Courage : WW2” is a first person shooting game which is full of action with dog fighting games feature and you experience what was look like in World War 2 and how these ultimate action game commandos laid their lives to proclaim war and peace for the fun free online fps strike shooting world. German shepherd dog is always with you for your protection unlike other pet dog game simulator. This WW2 Game contains a 古典射击 story mode, in which you have to complete 30 different gun fighting missions. Every adventure commando game mission is very sensitive, and you have to complete each enemies shooting mission to move on to the next assassins shoot game mission.
The difficulty increases with every modern weapons strike mission, so be careful and read the objectives of the offline commando games mission carefully. Free offline gun shooter games 2021 come up with advanced game features that are enough to provide with the best quality adventure commando game user experience.
The fun free online fps missions start with carrying out a simple fps commando shooting task but the ultimate task to end this (WW2) is to eliminate the snake head which is Hitler. So be ready and train yourself as a real American Commando. What is more exciting about “Call Of Courage : WW2” is that you have to be stealthy, and work with your mission counter assassin co-worker which is a military trained dog sim waiting for your strike attack on enemy orders.
To accomplish these offline commando mission games. In the fps commando shooting game our soldier is fully trained and equipped with 15 different kinds of addictive action game weapons. These are the commando shooting games weapons which were presented in WWII and were used during the war; it will provide you real World War 2 experience. Fight against the enemy military troops with pet dog simulation help. This American army Commando can be equipped with guns like Thompson, M1 Grand, Bar, MP40, K98, Colt 1911, Luger, Sten, Stg44, Fg42, MG42, Thomson, PPSH, Shotgun and finally a Panzerschreck.
Some “Call Of Courage: WW2” Features:
Spy Commando force with a trained dog sim.
Amazing World War 2 Game, for those who love to play WW2 Games.
Secret and stealthy missions which are difficult to complete.
Full Action Commando adventure Game.
Fun war games for free
Smooth and Steady Controllers to play the commando shooting games.
Realistic 3D graphics with amazing sound effects.
30 different free offline gun shooter games 2021 missions to complete with a gun fight offline commando games Story Mode.
15 different World War II guns.
Play as an American Commando game and let’s finish this long lasting WWII and bring back peace in the region. Download and please provide us your suggestions for further improvements.