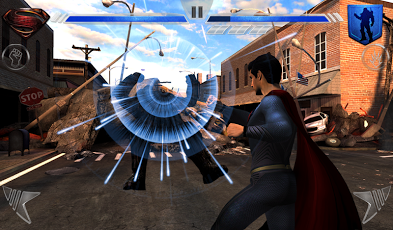 Description of Man of Steel

Hot applications make large number of downloads. 20,000+ users downloaded Man of Steel latest version on 9Apps for free every week! The app has made a strong effect. This hot app was released on 2015-10-21. Enjoy playing with new, amazing features!
Man of Steel APK Game is a new released game by Warner Bros. you can enjoy your favourite upcoming movie game on Android smartphone or tablet. General Zod is threatening Earth and only the Man of Steel can stop him. Utilize the powers of Superman to fight your way to victory and save the planet from certain destruction.
RELIVE THE EVENTS OF THE MAN OF STEEL MOVIE!

Attack, dodge, block, and utilize various super powers including flight, super speed, and heat vision to defeat Zod and his evil forces.
Play through an in-depth Story Mode or set a personal high score in the intense Survival Mode.
Battle a challenging cast of mini-bosses and technologically advanced foes featured in the film.
BECOME SUPERMAN LIKE NEVER BEFORE

Unlock and purchase up to 6 different suits from the Man of Steel movie.
Upgrade your suits to become a truly unstoppable force!
Customize your experience by upgrading the specific abilities YOU want to use.
Embrace the true strength of Superman with bone-crushing combos, all with the swipe of a finger.
AMAZING GRAPHICS

Delivers next-gen graphics on your phone or tablet with beautifully detailed animations and cinematic sequences.
Fight in a variety of detailed and interactive 3D environments including Smallville, the Kent Farm, and more.