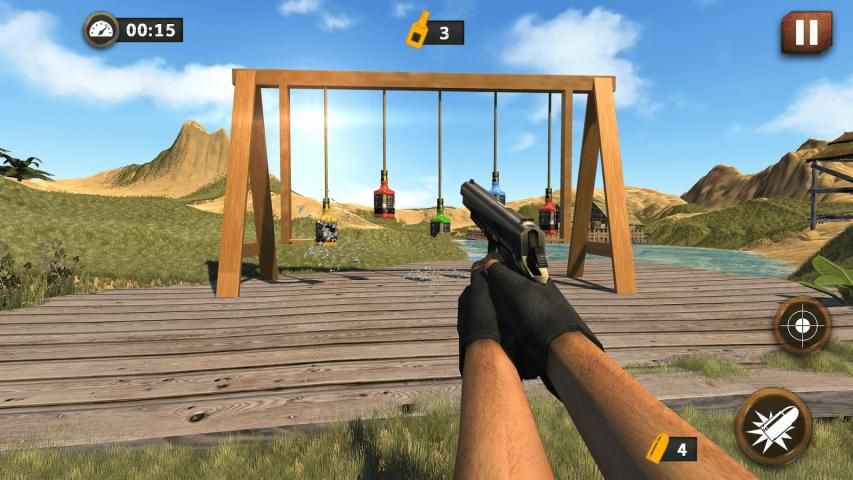 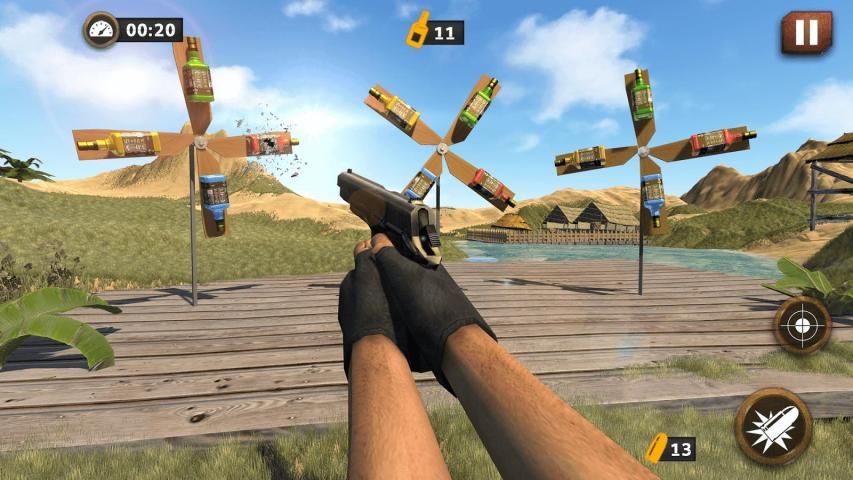 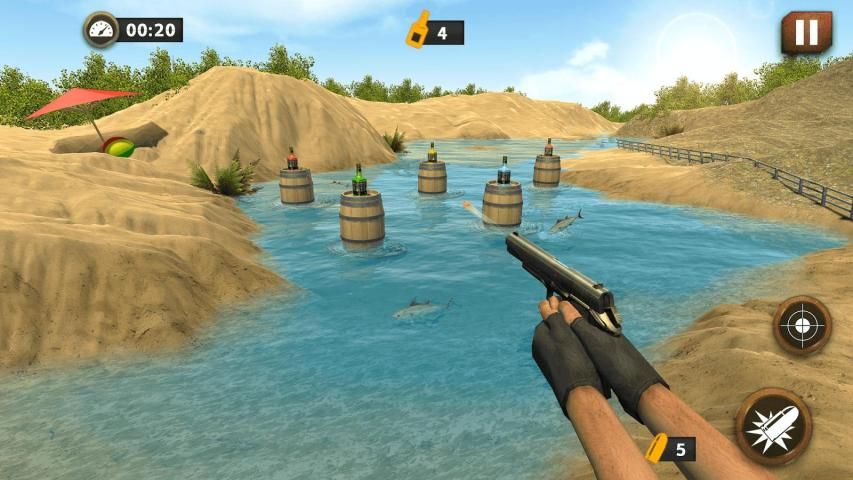 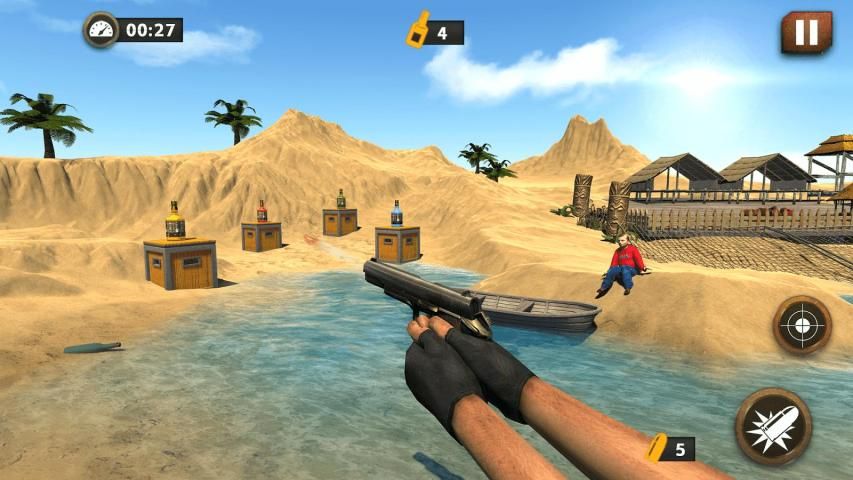 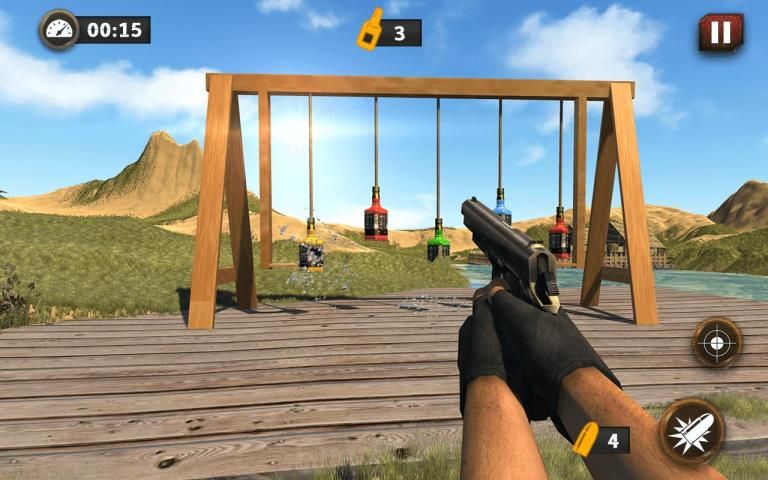 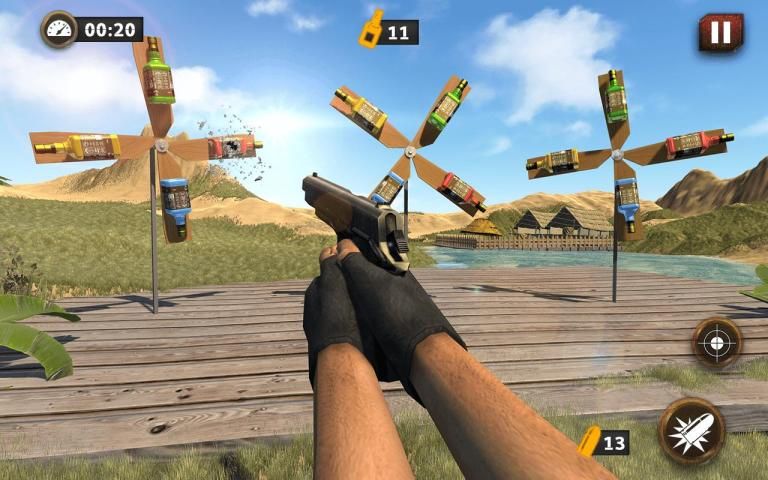 I'm glad to tell you that 20,000+ users downloaded Real Gun Bottle Shooter Expert latest version on 9Apps for free every week! This makes the app feel more like a popular merchandise, which is very positive in my opinion. This hot app was released on 2017-09-10. If you still need more information collecting extra factors, read below.
Welcome Retired Officer!! There is very famous Bottle Shooting 3D competition going to held in your own city. I know you are champion of shooting games but this game is different from the others. Play the most exciting and thrilling bottle shooting game of 2017. For the first time in your pocket there is unique bottle shooter game where bottles are not static. This real bottle expert shooter game is one of the best gun shooting game. Target the wine glass bottle and ready to miss the fire. This time bottles are moving with motors and gears to make this bottle shooter to the next level of professional shooting. This pistol score game gives you a chance to play something else other than the old bottle crush games. Just take your gun, sight a target and start the shooting bottle game. You need strong pistol grip for bottle shoot in the fixed time duration. This classical shooter game needs focus and precision for bottle hunt master as the levels become harder and thrilling with limited time.
Are you a fan of difficult shooting game which involves complete shooting skills to pass the level? Than you are on the right place. You can call this bottle shooting game as the impossible bottle shooting game. This simulator surely test your shooting skills. Blast bottle with your gun fire and try to listen the beautiful sound of broken glasses. Bottle shooter and archery games improve your focus and accuracy skills level. Take accurate shots to smash all the bottles with pistol while playing broken glass game. This new bottle blast game is specially design to test and improve shooting skills as gun shooter play vital role in army forces, police snipper training to fight terrorists and prisoners in the battlefield. Be calm and stay focused while shooting the moving bottles and practice daily to improve your shooting skills.
Complete all the levels from basic shooting range to master shooting range. There are two modes in this shooting expert game. One is classical bottle shooting arcade mode in which you are going to complete missions. Second mode is all about survival. Bottles are thrown in the air from one side and you are going to shoot those crystal bottles. You need to shoot all the bottles to get more and more points. The more you score the more you earn coins. Unlock different weapons like shotguns, Ak47, modern pistols to increase your shooting ease. If you can strike all the bottles within the time then you will become a real bottle shoot 3d master. Every level's difficulty is increased from previous level. So, enjoy the ultimate bottle shooting game with modern and classic weapons.
Real Gun Bottle Shooter Expert : 3D Shooting 2017 Features:
- Relives Stress and playable any where without internet
- Realistic gun shooting and broken glass sound
- Both endless and challenging levels shooting gameplay
- Level difficulty increases as you become bottle hunt master
- Shoot like a real cowboy
- Bottle shoot game is for all ages including kids, youngsters and adults
- Best thrilling action packed game
- Aim and smash the bottles with smooth gun controls