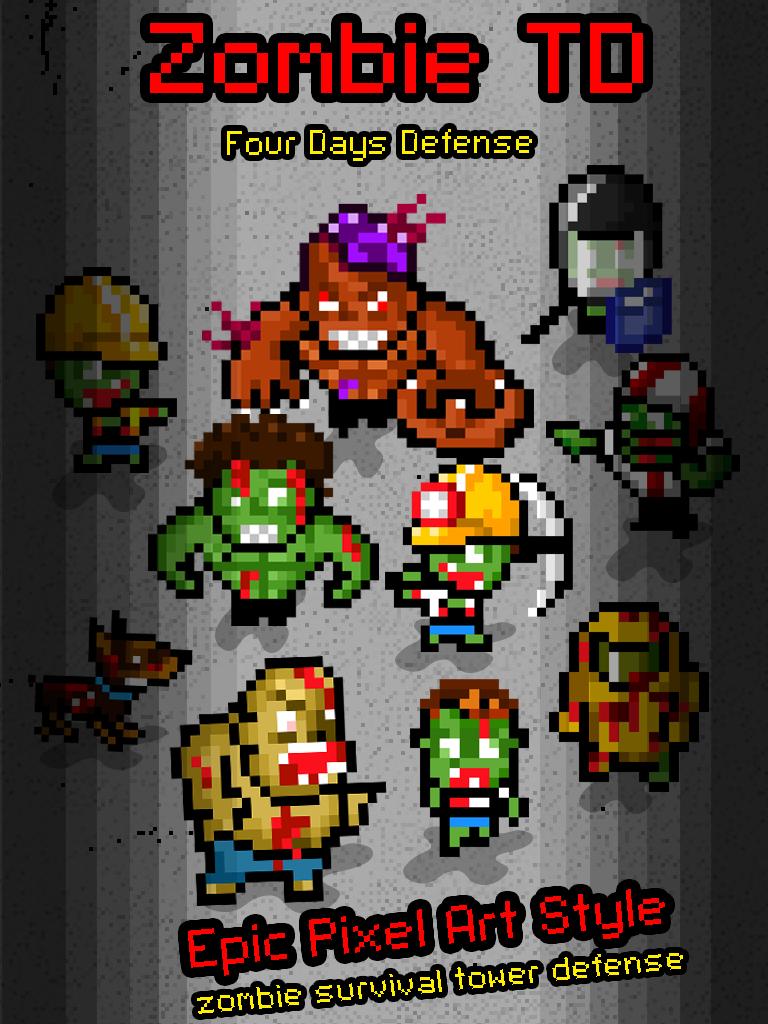 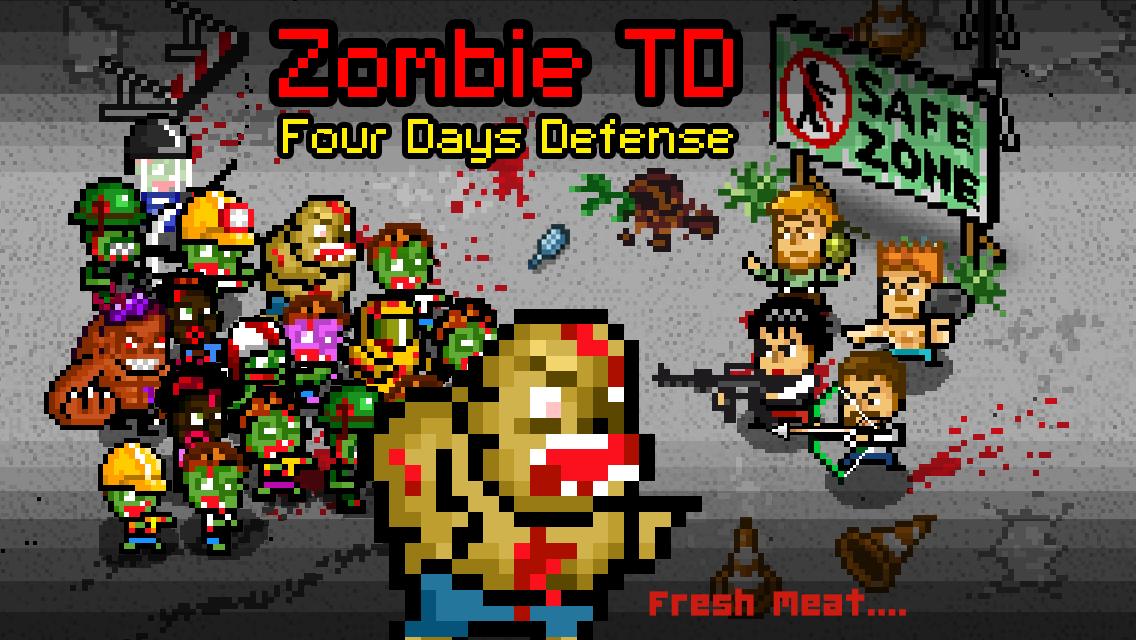 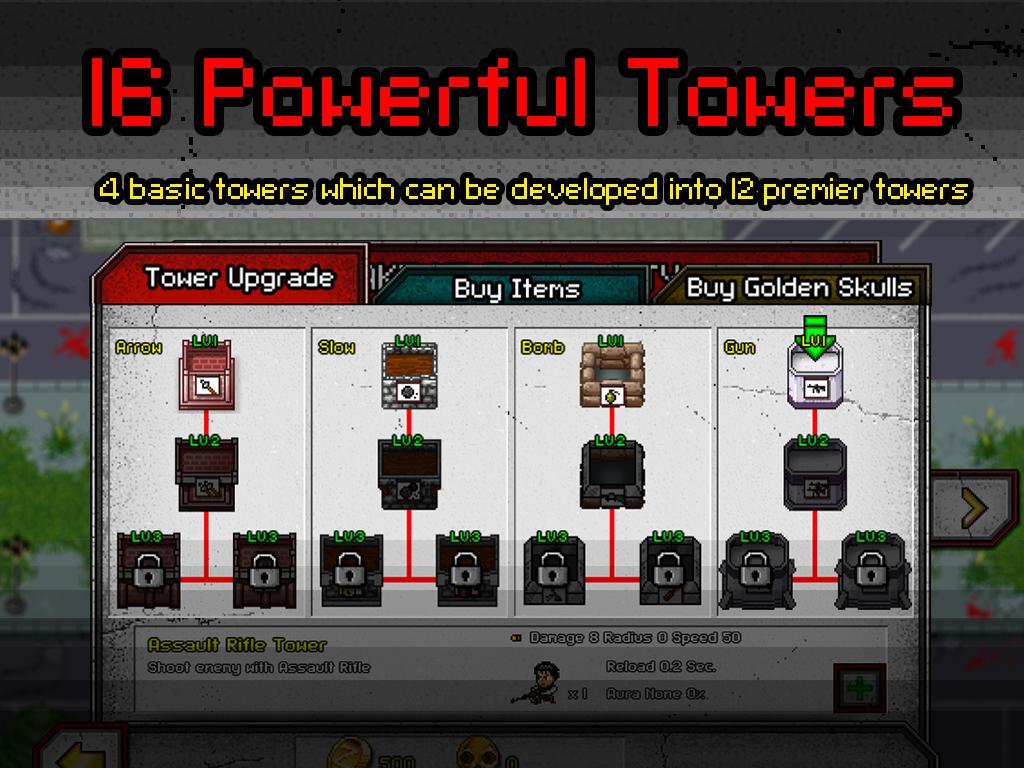 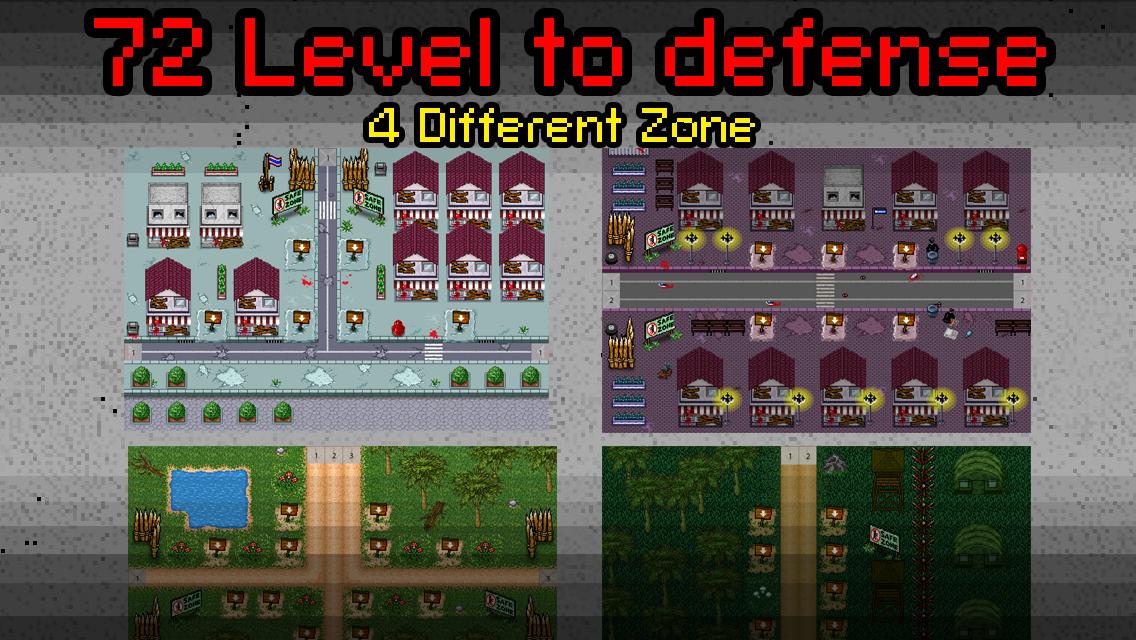 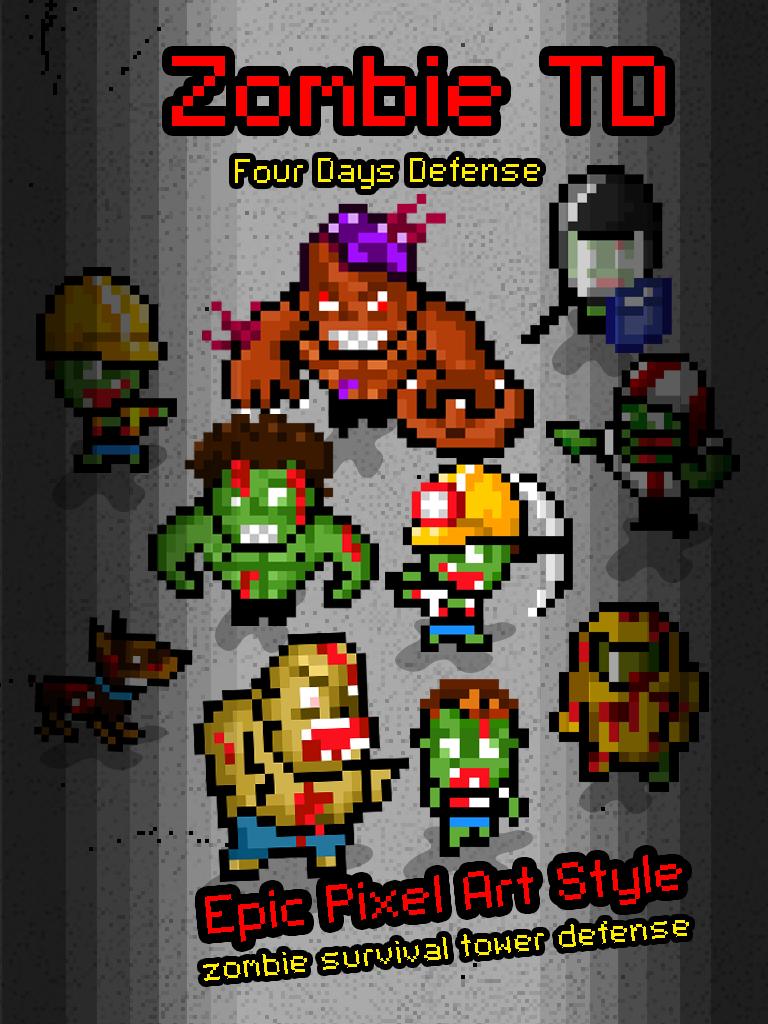 Zombie TD 4 Day Tower Defense game
Epic Pixel Art 8-bit Style Graphics 72 Level.
The end is coming! A virus is spreading across the planet like wildfire. People aren't dying though. No, they're turning. The zombie apocalypse has begun. In the final days, man kind's survival rests on your shoulders; in your towers. It is up to you to maintain our last line of defense.
Zombie 4 Days Tower Defense pits you against wave after wave of zombies. Build, maintain and upgrade towers to hold off the zombie hordes over the course of 4 grueling days. The game is set in city streets and the player must construct towers to fend off wave after wave of zombie. Each tower can be equipped with a variety of weapons. The further the player makes it in the game, the better the weapons (anything from arrows to grenade launchers). Just as the weapons get better, so do the zombies. The difficulty level grows as the game goes on and so must the players ability to work with the tools and weapons given to him or her.
Designed to resemble classic 8-bit video games, Zombie 4 Days Tower Defense is a unique Tower Defense game for iOS devices (iPad & iPhone). Similar to the cell shaded look of the Borderlands video games, the 8-bit look gives a classic yet modern feel to the game. It will take the older gamers back to the days of the GameBoy while satisfying the newer generation's love of all things zombie. This is the perfect game for anyone who enjoys tower defense games like Plants vs. Zombies and Kingdom Rush Frontiers. While it is a tower defense game, the YouTube video at the bottom demonstrates just how unique of a game it is.
THE GAME FEATURES:
1. MORE THAN JUST YOUR RUN-OF-THE-MILL ZOMBIES
Expect wide range of zombies to fight through each level. Players will need to fend off "tankers", "sprinters" and of course, every-day zombies.
2. DIFFERENT TOWERS TO SPLATTER THOSE PESKY UNDEAD WITH
Build 16 different types of towers, each one stronger than it's predecessor, in your quest to rid the world of the undead.
3. ITEM UNLOCKS THAT WILL EASE THE BURDEN OF THE BATTLE
It will impossible to win if you don't utilize the plethora of items at your disposal. Everything from bulldozers to fireworks will be essential tools in your battle against the zombies.
4. A HORDE OF LEVELS BETWEEN YOU AND VICTORY
72 zombie filled levels will put your skills to the test as you fight to save the world. Each level features more waves and tougher zombies, meaning that the fight is going to get a lot harder before it gets better.
5. REWARDS FOR PUTTING DOWN THE UNDEAD
It's always nice to have a rewards system in place for the player. As the player completes 20 different assignments, they will receive the corresponding achievements.
6.Epic Pixel Art Style Graphics
All Graphics in game are pixel art style and perfect for high definition screen. With numerous effects, we are going to present you so many indy classic game.
Do you think you have what it takes to save the world? Try your hand at being the hero in the zombie apocalypse with this free-to-play strategy game.